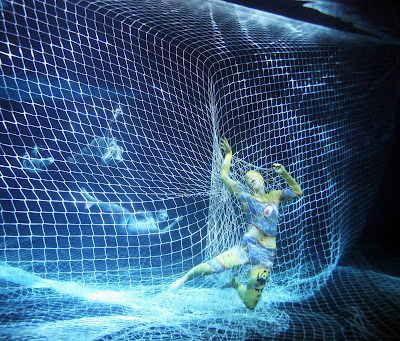 Phew. I am back in the bookshop, more or less paint-free, although I keep finding yellow spots here and there, I guess it will only be a matter of a few weeks until they all come off.

Six freedivers got up at the ungodly hour of 4:30 on Monday morning, to be transfromed into fish by a bunch of crazy (but amazing) bodypainters. One would have thought that five hours would be enough, but as the artists told me, they always use up all the time they have and barely finish. I guess they never heard of such a thing as 'official top'.

Anyway. Here we were, all a bit sleepy, in a pool in Berlin. First of all, we all got to strip down to a pair of invisible knickers. The guys had the added pleasure of having to shave their hairy chests, and legs, too - I have to say, both Ulli and Martin looked a bit strange. Since all women are hairless by nature, we had no such problems. The only issue I had was that my wonderful painter, Matthias von Matuschka(check out his work on www.muschka.de) was in charge of the artist's team, and therefore busy sorting out all manner of problems rather than painting me. Since everyone else was starting to look a bit colourful (mostly Elisabeth Kristofferson who made a lovely whaleshark) while I was still sitting around in my undies, this got me a little twitchy, especially since we didn't even know what fish I was going to be. Other fish were: a whaleshark, an orca, a lionfish, a clownfish and a turtle.

When Matthias finally got round to switching on his airbrush, it quickly transpired that I was going to be a bright yellow fish. That is all I knew until I ran out from under his brush at four minutes to official top. He was still trying to paint my hands at this point, wich wasn't very successful since it did not dry and came off as soon as I hit the water. Oh well, the rest stayed on more or less. Acting the fish was a rather strange experience, especially when I didn't even know what I looked like. I got pretty tangled up in the net, which made Martin Müller and his safety crew pretty nervous. We were thinking: if one of us gets properly caught and needs to be rescued, that will make the headlines for sure. Still, this did not seem to be the way the WWF wanted to go, so we behaved ourselves and stuck with acting the drama.

A drama it is: apparently, 1 million tons of fish per year are discarded as unwanted bycatch in the north sea alone. Whales, turtles, dolphins drown in the nets every minute. For anyone who spends as much time in the water as we divers do, this is a horrible thought. I had no idea it was that bad. The WWF publishes a list of the fish they consider ok to eat and the ones we should boycott. Check it out before you buy fish in the future.

I finally saw what a funky yellow reef fish I was when I went into the shower to wash off the paint. This was a major mission, it took us well over an hour of scrubbing with the green, scratchy side of a washing-up sponge to get most of it off. I think I have removed the top layers of skin along with the colour. I got so caught up in scrubbing everything, that I was peering over my shoulder and could just see that there was something there - all my efforts did not seem to get it off. Then I realized it was my tattoo.

You can see a short video of the whole thing on http://www.wwf.de/themen/kampagnen/beifang-kampagne/foto-event-in-berlin/

Now it's back to trying to do pooltraining, which is still not happening. Eindhoven is in a couple of weeks. Oh dear.

Good video. Without any text, it puts an immediate message across. It's also quite interesting that it shows the grace of humans underwater, combined with something quite threatening.